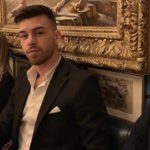 Giax
“Practice early if you want to become a master!”
Giax shares his fondest childhood memories with art. Art has always represented a remarkable part of
his life, a passion that has been brought by his grandfather – and later by his mother – teaching him
how to paint and sketch since he was a little boy.
Born on 23 rd April 1999, Giax grew up in the city suburbs of Zurich where he first came in contact with
the “street culture”. Youth brought him the urge to rebel. He attended a private school in Zurich where
he eventually had the possibility of choosing Graffiti as an option subject for his art class. Giax
learned that Graffiti is more than simple street sketches, it is another way of expressing art which is
often not understood or underestimated. He learned that behind each Graffiti there is a hidden story.
Graffities convey messages of emotions: anger, sadness, frustration but also hopes and happiness.
They can be critical towards several political and/or social issues giving free expression while using
vivid colors, remarkable lines and shapes, and curious characters.
"If the future is a prospect, then one should begin to shape it in the present" (Frances Bacon)
The materialism of a capitalistic society affected Giax more and more with a follow up of
misunderstandings in his private life. The connection to art was lost! He slowly drifted apart, in a world
of his own, driven by aversion towards any kind of rule and selfish greed. He lived his present with no
worries for his future. This reckless way of living brought Giax to spend five months of his young life in
custody. During this period, he read a few books that made him realize, among other things, how he
really missed art. He took advantage of this time to reorganize his thoughts and set new priorities. His
world changed, new colors were brought into his life and the black and white film in which he had
been trapped so far, vanished.
“The last of the human freedoms: to choose one's attitude in any given set of circumstances, to
choose one's own way…” (Viktor Frankl)
After his release, Giax discovered his way to combine emotions with a newly found passion for art. He
took out old utensils to start painting again and at the same time he began to explore the creative
world of various contemporary artists who undoubtedly had affected his artistic vein. Needless to say,
Pop Art had also and still has, great influence over his artwork. With no further thinking, Giax started
“painting” his own feelings on canvas: dormant thoughts, dreams, goals, sudden emotions,
vibrations…as a result his first collages took shape.
For Giax the result of assembling different pictures in shape and content is uttering amazing and most
important unique. Magazines and newspapers provide him the images he needs to create his canvas
background. The theme, the meticulous choice of images and colours, the design, all of this
amalgamates in a harmonious whole.
Giax’s artistic career began during the pandemic period. Since then, he is constantly trying to
experiment new ways of combining colors, printed images and comics characters to make each
painting a unique. For him painting is more than a leisure, is a way of give and take, an emotional
experience between him and the society we are living in.
“With my past experience and my art, I want to show that every dream is achievable if you put
passion into it. My dream is not only to give hope to every potential budding artist but also to support
art and education in our society. Let the world become a colourful and light-hearted place!”