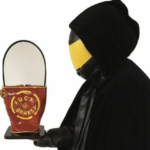 The works of Norman Gekko can, on the one-hand be viewed as a scathing criticism on contemporary society, on the other a refreshing self-parody in a world so often guilty of taking itself too seriously. After all, can discarded pet food tins, broken toys and obsolete electrical items really constitute art? Look closer at the stylised images, that appear on first glance to be childishly simplistic, and you realise that the objects have been deliberately arranged to facilitate the trompe-l’oeil motif to emerge. It is this duality that lies at the heart of Norman Gekko…nothing is quite as  it seems. Not least the artist who, by choosing to remain anonymous, relinquishes centre stage; allowing the artworks to amuse, captivate and provoke unimpeded.

Norman Gekko is obviously a pseudonym, what can you tell me about him?

The name Norman Gekko personifies an idea. Norman could so easily be ‘no man’ and ‘Gekko’ can be seen as a reference to the small lizard that hides within its surroundings. To describe Norman Gekko as one artist is too simplistic. Norman Gekko should be considered as a concept…a collaborative project. Of course there is an individual who produces the pieces of art but other people input into the works and enable the creative process. So to define Norman Gekko in reference to gender, age or nationality would be missing the point.